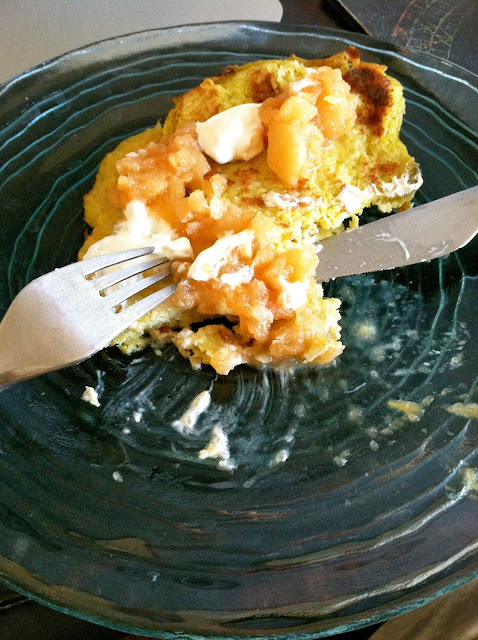 Polish cuisine is a staple in my home state of Michigan. Famously, Polish wedding receptions prepare more food than guests can consume, there's a Kowalski's Deli 'round every corner, and everyone knows and frequents the best Polish restaurant in town. For some reason I thought preparing a simple Polish potato latke would be e-a-s-y. Silly me.
I will not admit in writing just how many times I have tried to make potato latkes. They have always failed...or rather I have. So when good friend Joan Rybinski visited recently I seized the opportunity to get an in-service on latkes. What? You don't ask your guests to cook for you?
There is nothing like the real thing baby. Fortunately for me, Joan was happy to oblige.

According to Joan, this recipe hails from the cookbook, "Treasured Polish Recipes for Americans" but Joan's technique is...ah, dare I say it..."Pure Michigan!" 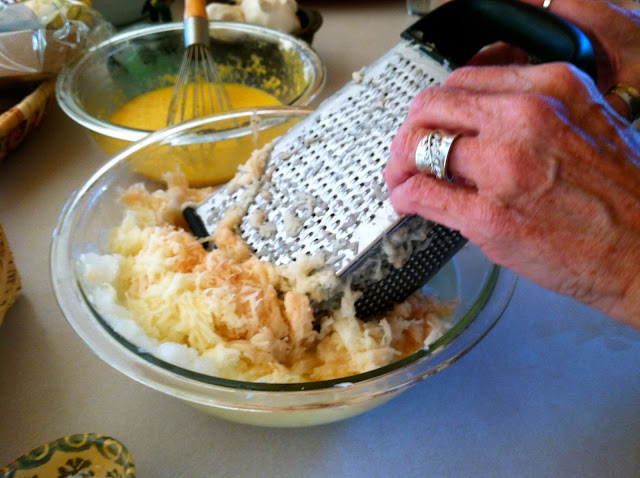 First, grate the potatoes on the medium grate. We used peeled organic red potatoes. Squeeze the liquid out of the potatoes with your clean hands. Pour off any accumulated juices. Grate the onion right into the potatoes. As with all peeled potatoes, exposure to air turns them brown. Don't worry, the frying turns them yummy looking again, but the shorter the time between prep and cooking the better.

Whisk the eggs, flour, salt and sugar in a separate bowl, then add this to the drained grated onion and potatoes. Mix well using a spoon.

Heat your skillet, or in our case griddle, as you would for pancakes. Prepare by adding approximately 1/4" of vegetable oil to the pan/surface. When hot, using a spoon, drop 1/4 cup or less of the potato mixture onto the hot skillet for each pancake, then adjust your temperature. We had two gas burners going under the griddle at medium low, but every stove is different. The key here is to have the heat high enough to cook the potatoes but not so high they burn. Add more oil as needed. 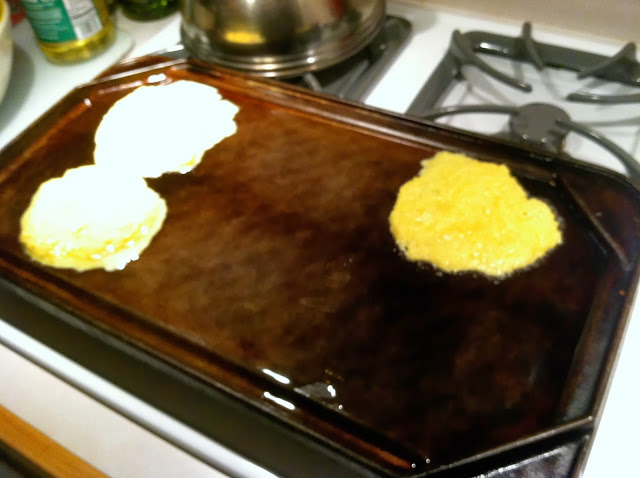 In the photo, you can see how Joan flattens the latkes with the back of the spoon until they are thin, yes THIN! As thin as possible! THE secret to getting those potatoes cooked through! 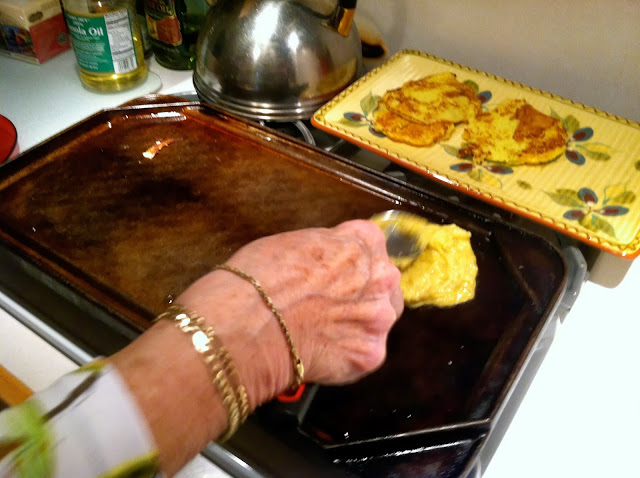 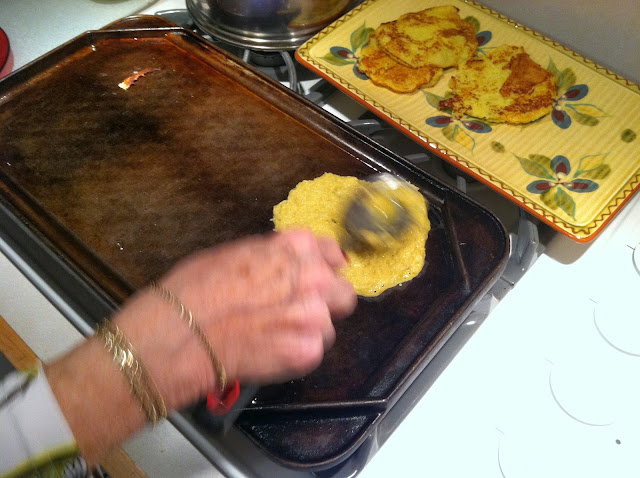 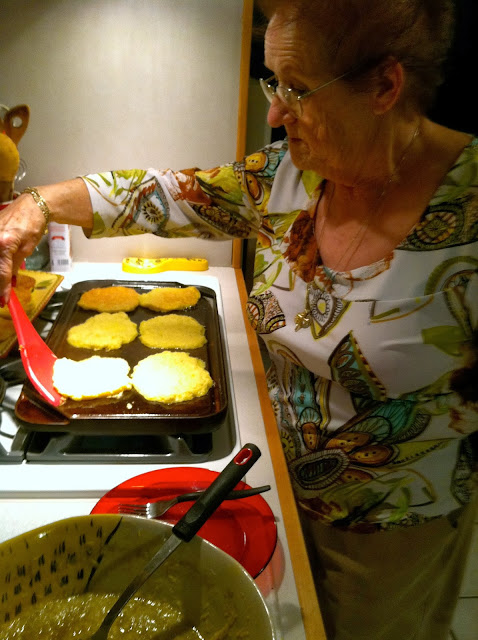 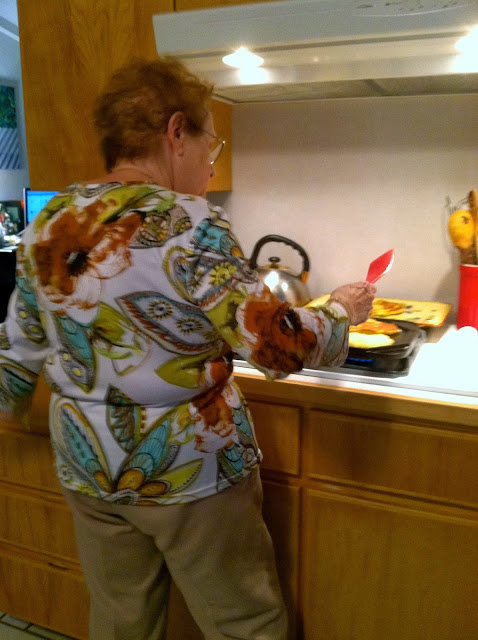 Walking away from the stove is not an option. 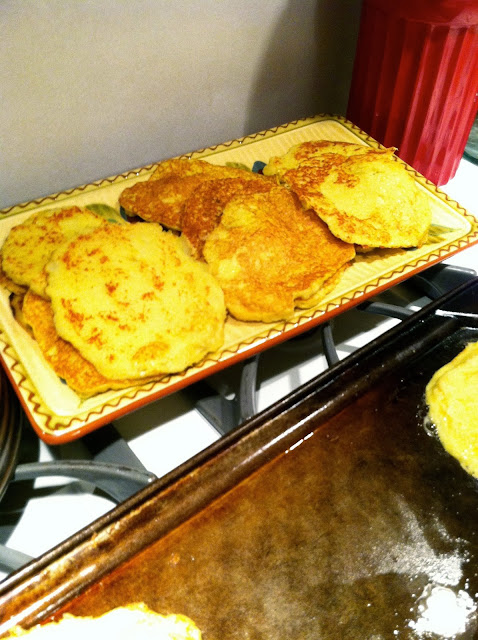 How pretty are these!! Joan told us that when she cooks for her family she uses 6 cups of potatoes (adjusting all the ingredients, of course) because they devour them! She reminisced how her late husband liked to lay on the floor watching football and pop the cold leftovers (there were leftovers??!!)  right into his mouth. He was crazy for them! So are we Joan! 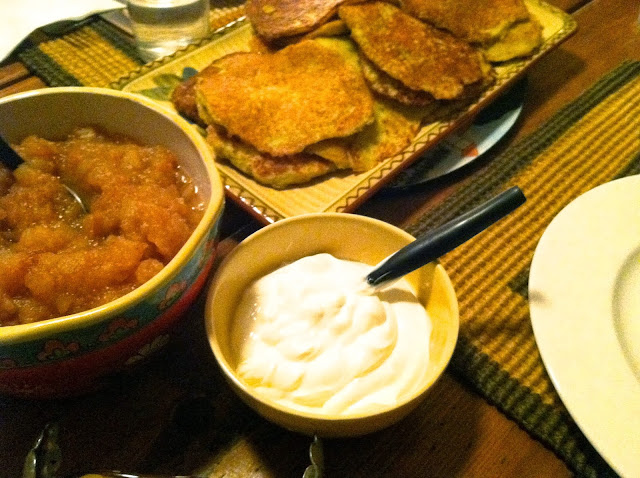 The traditional toppers for latkes? Sour cream and homemade applesauce. My mother did the honors on the applesauce. It was a combination of several varieties of apples, (which filled my 4qt. saucepan), 1/3 cup of granulated sugar and a smidgen of water (just enough to cover the bottom of the pan) a teaspoon of cinnamon...honestly, that's all. Cooked over the stove until she said it was done. Bonus tip: Mom also got out the potato masher and mashed until she got the desired texture. The applesauce was perfect, not too sweet, just chunky enough, thanks mom! 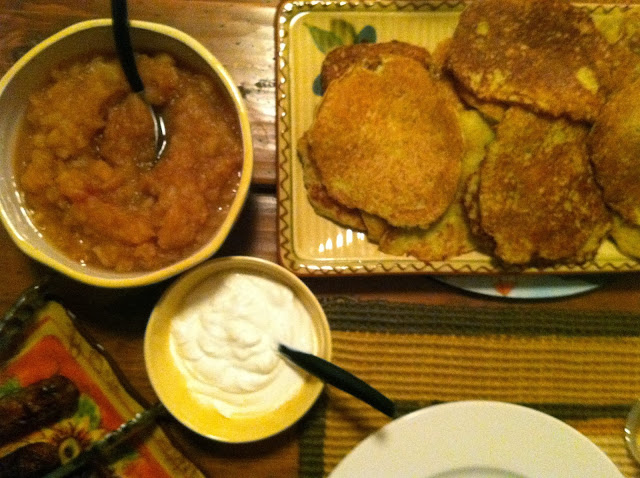 Hot or cold, these babies are yummy! They are nice with a side of scallions too. I will be making them for Christmas. Hear that honey? Thanks again Mrs. Rybinski, it was lovely spending time with you in my kitchen. 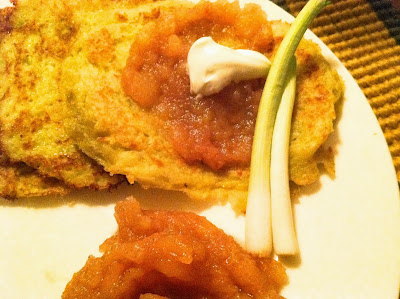 Travels with Mom and Joan

The last couple of weeks were spent with my darling mother and her good friend Joan. What a pleasure it was to show the ladies some of our favorite New Mexico haunts, sans the closed National Parks, of course. No White Sands..sniff... 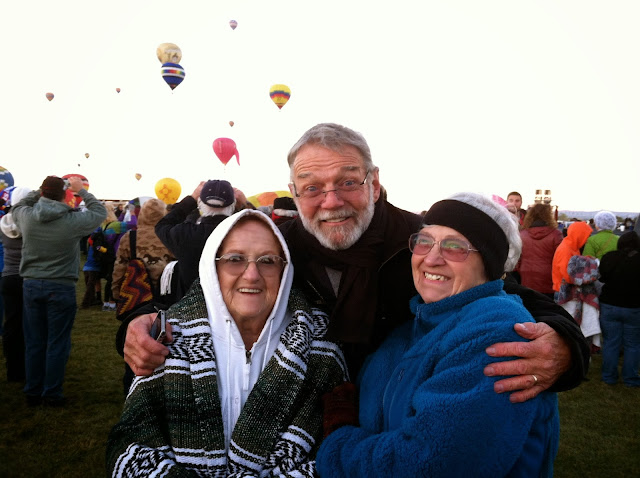 We managed a much desired trip to the Albuquerque Balloon Fiesta. If you have never been, it is quite an experience to be in the thick of things with hot air balloons ascending directly above your head! 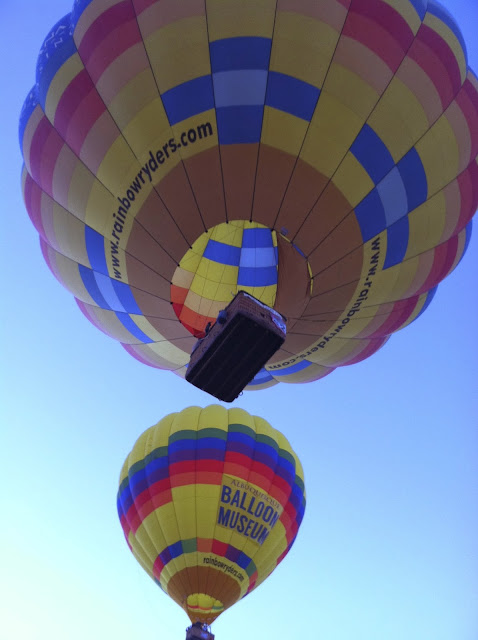 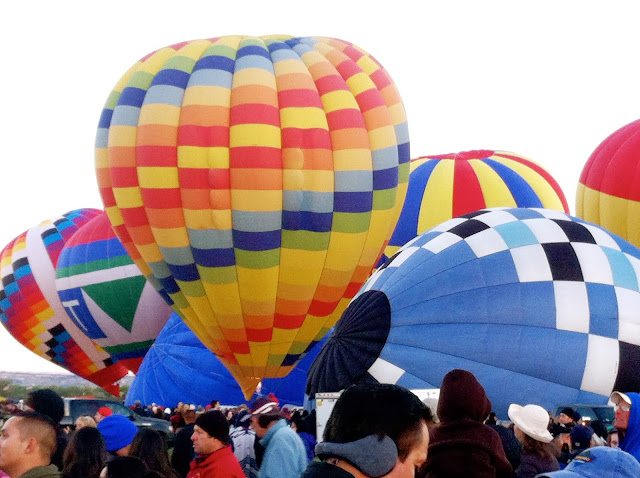 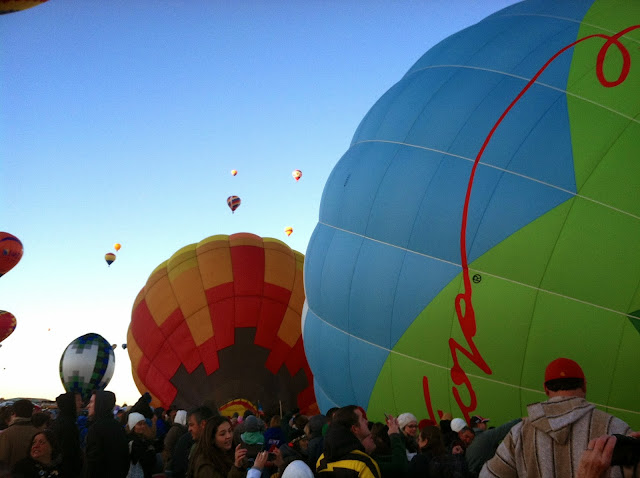 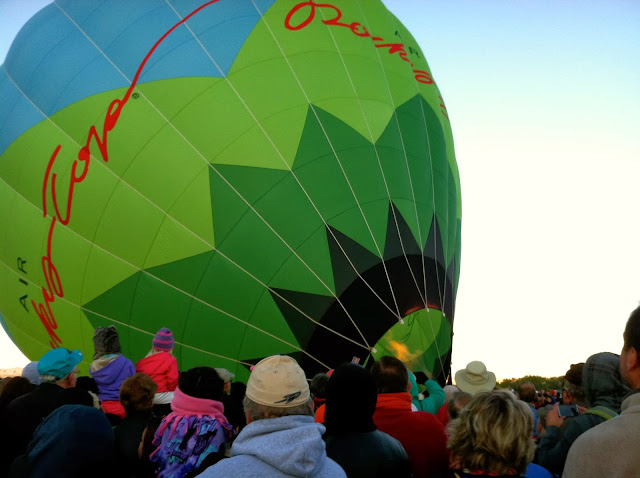 We enjoyed cheese enchiladas at one of my favorite eateries in Albuquerque, The Range Café. 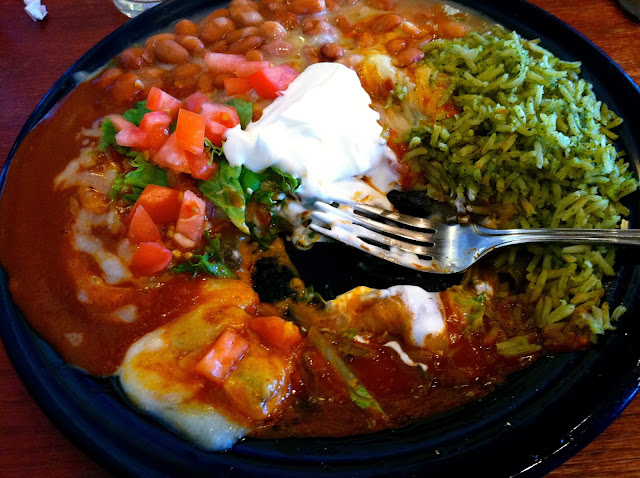 Then on to Santa Fe to visit the amazing home of our dear friend and fellow Italian Sketchbook participant Rick Allred and friend Maggi and then on to an Opening Reception at Metallo Gallery in Madrid, New Mexico. This was Mom's first time to the gallery that represents Michael's artwork. 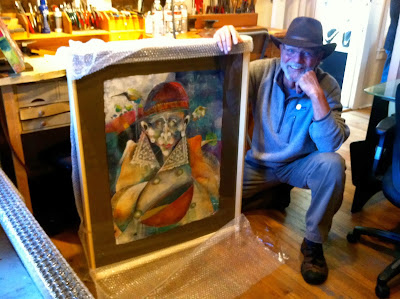 Above, Michael with "The Juggler" and below right, his depiction of "The Magician"
...with Mom on the left, enjoying the music just outside the gallery 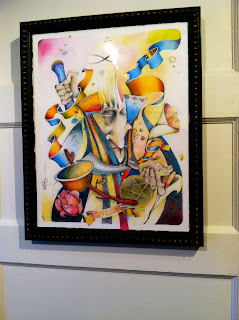 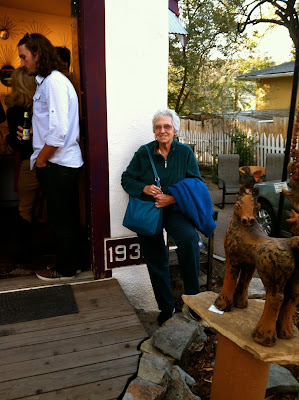 We had a wonderful reunion with former students Terry and Mary Daniels (class of '92!) and their lovely daughters; who surprised us by driving all the way from Phoenix for the show! It was so great seeing you guys! 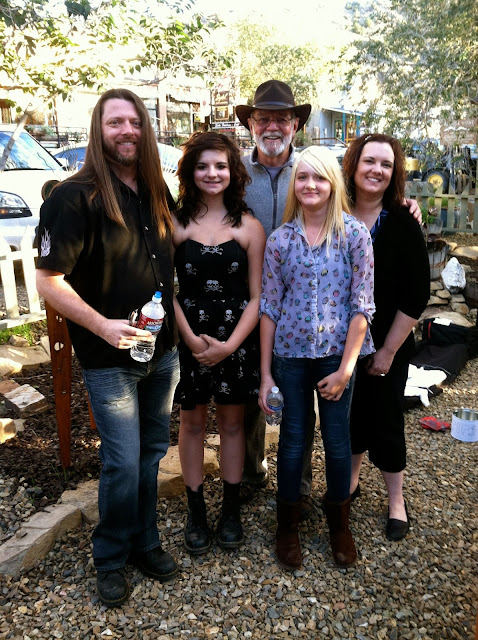 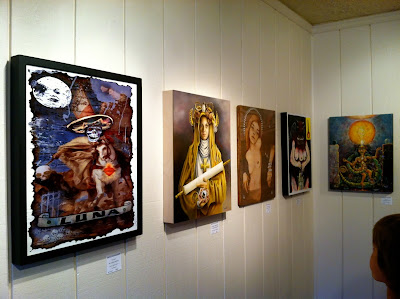 Group Show ~ Tarot - The Major Arcana at Metallo Gallery, Madrid, NM. With each artist depicting one of the Major Arcana from the deck of Tarot in their own style. 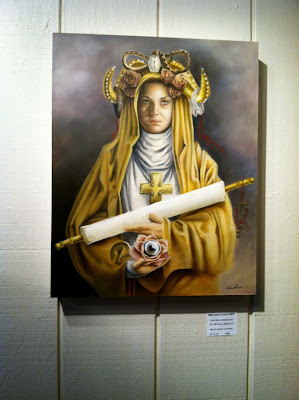 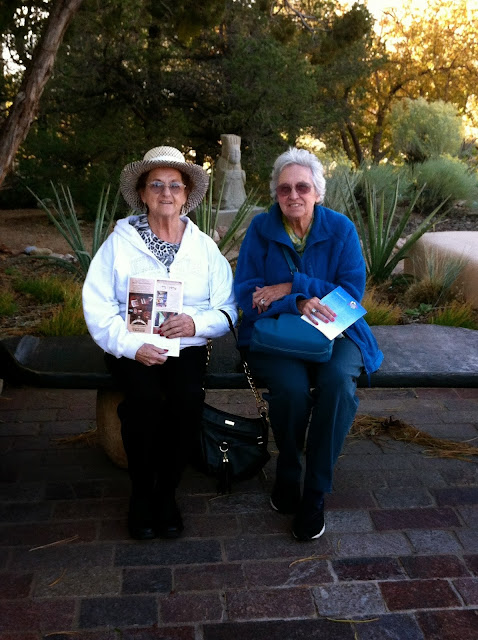 We also managed to finally make it to the Museum of International Folk Art and we are kicking ourselves for not getting there sooner! What an incredible and unique museum.

Additionally we visited the Georgia O'Keefe Museum, walked the Plaza, toured the Miraculous Spiral Staircase at the Loretta Chapel, perused a local art fair and hit the spa tub at the our favorite motel. Not bad for two days!!

And Finally, some colors of Santa Fe. It was a great trip! Thanks Mom and Joan for getting us out of the house! 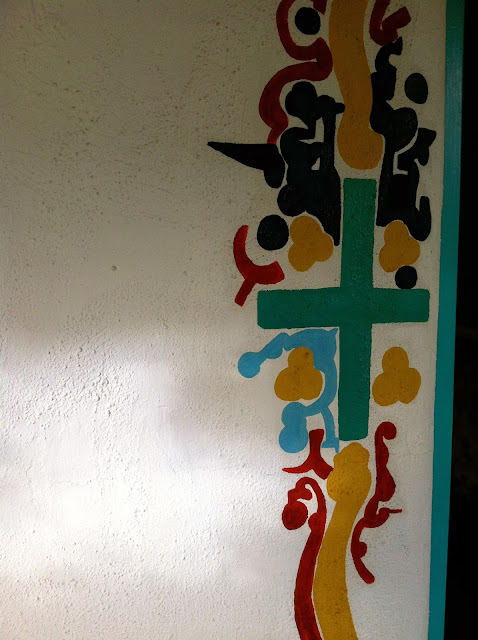 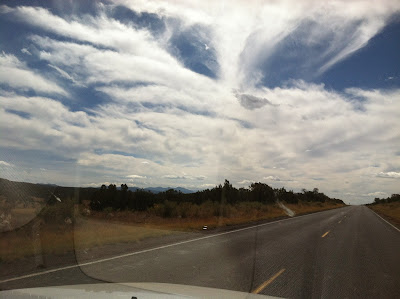 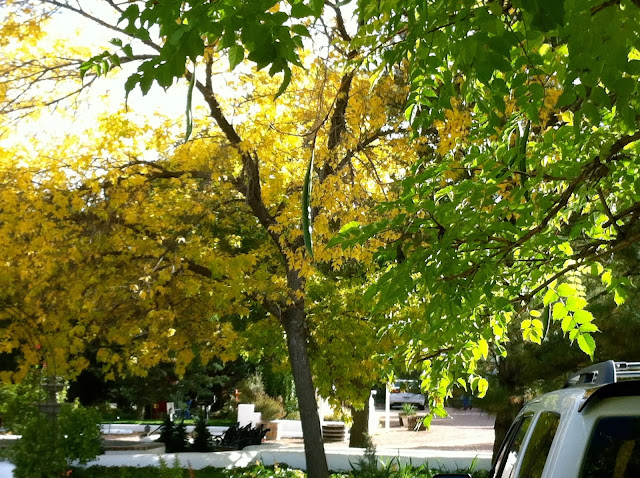 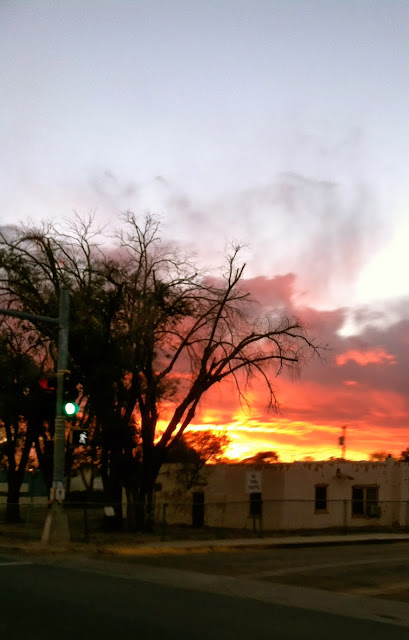 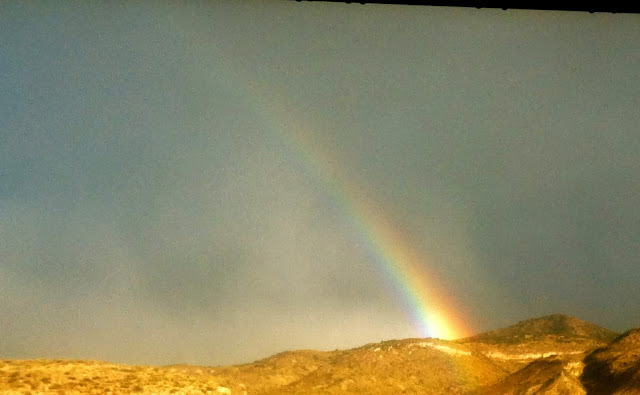 "What I want most? Deep love of my bad ideas."
Jake Gyllenhaal ~ Interview on Inside The Actor's Studio