Time is the Only Variable

This is my mantra. How else could I explain the gap that occurs between the conception of a brilliant idea and its execution? I have come to conclude that every good idea must need to bake for a while on the back burner of my brain before manifesting in this world...yes, that's my excuse.
This particular project began more than two years ago. How simple is seemed at the time (don't they all!). I would just purchase a fountain, Mike would dig a hole and we would have a beautiful water feature. To quote an endearment from my son..."Silly Momma." 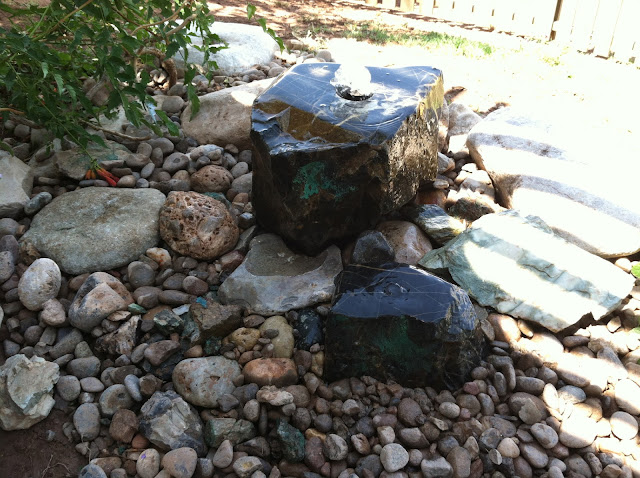 In the fall of 2010 I fell in love with the beautiful stone fountains from Range West in Madrid, New Mexico. My husband, Michael is represented by Metallo Gallery in Madrid which is right next door to Range West Gallery and all those lovely stones.
Range West fountains are worked by hand by Stone Artist Joshua Gannon from granite, basalt or other beautiful rock from New Mexico and Joshua lovingly juxtaposes polished surfaces with the natural rugged surface of the rock, exposing the beautiful striations and layers of color captured by time. I was smitten. Really, resisting was futile. Three years ago I purchased two beautiful fountains.
After several summers of dreaming about how they would look and sound, this summer the fountain idea became a reality. Here is a "blow by blow" of the installation, for all my friends whose "gap" is not quite as large as mine.

For this project we used Range West's Installation Kit
with a few of our own touches, consisting of:
Two -  36" 4" x 4"s
Two -  30" 4" x 4"'s
Eight - heavy duty "L" bracket, w/dry wall screws
Two - 36" steel channels
Metal grid w/cut out  trap door
Roofing Rubber
Heavy duty pump
Heavy duty plumber hose (for the large fountain)
1/2 " clear tubing the small fountain including a
brass "t" to connect the two fountains
Of course you need all the appropriate tools
Thank you Range West for some of the installation jargon.
A special shout out to our good friends Chris T. for giving a hand with
the electrical and to George T for the use of his carpentry skills and awesome saw! 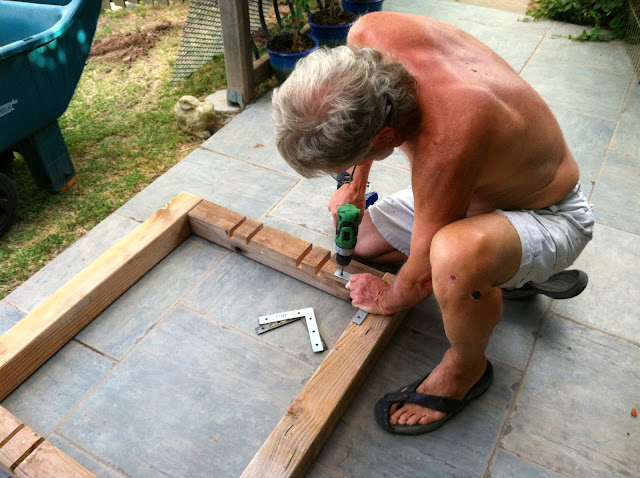 Here, Michael is laying out the four 4" x 4"s on a flat surface, joining the corners with "L" brackets on both sides using 2" drywall screws. Obviously you can build any size you like...the steel channels are key here. 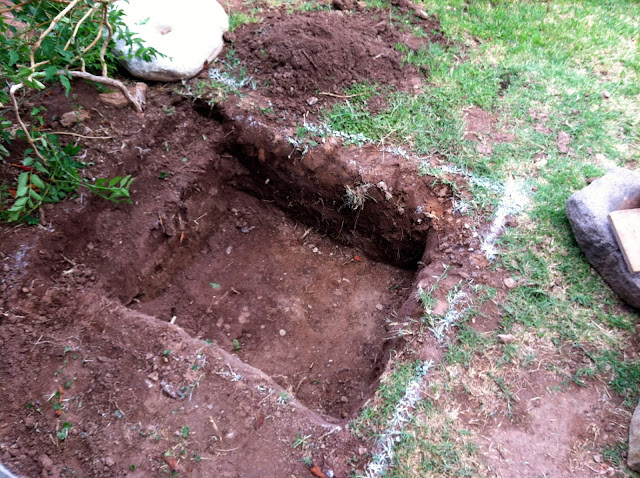 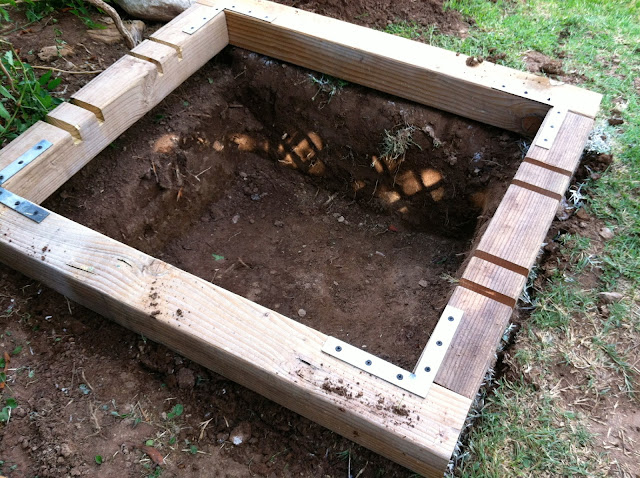 Measuring the size of the "lip" or ledge needed to countersink the frame. Marking the ground with chalk helped. 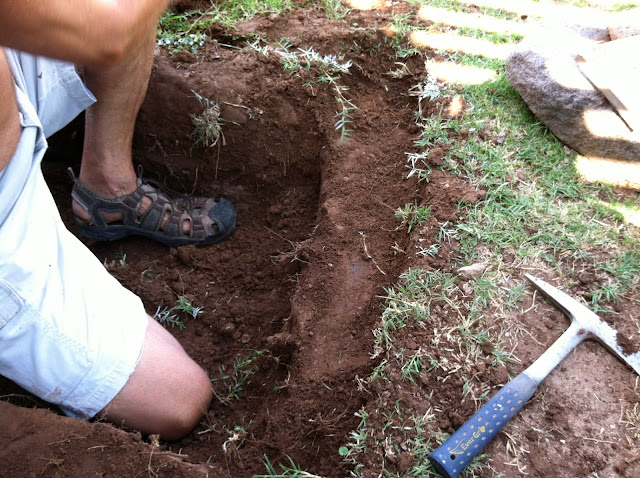 The frame must sit level with about an inch above ground level. The slightly raised portion will help keep organic matter from flooding the reservoir during heavy rains (which is the only kind we get here in the desert). Notice the pick? Necessary to get through our hard, dry desert ground! 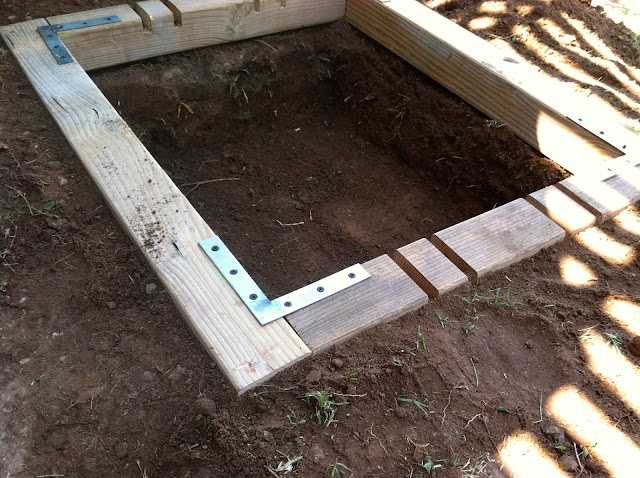 You can see how the frame sits onto the ledge. Also notice the slats in the top of the frame. These are necessary to hold two pieces of steel channel. They slide into the grooves in the 4" x 4"s to hold the fountain base. 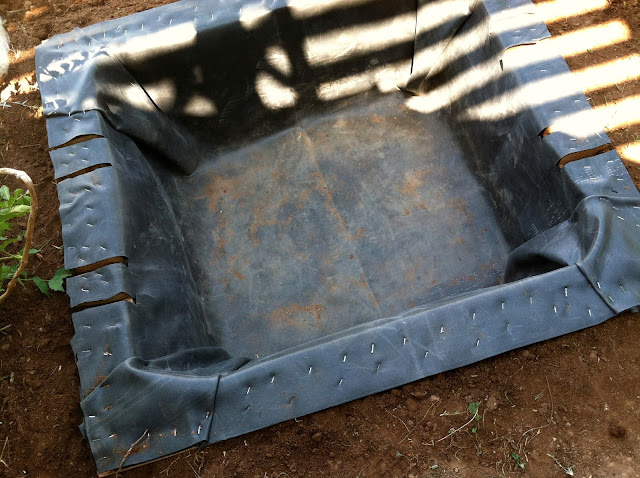 After leveling the ground in the center of the reservoir hole, Michael placed the pond liner over the entire catch basin, pushing it down into the hole and the corners creating as straight a drop as possible. Beginning at the center of the timbers and working out (just like stretching a canvas) he stapled the liner onto the timbers, folding the corners in and stapling. He also placed some staples at the edges of the timbers. It is important to make the bottom of the basin as level as possible. 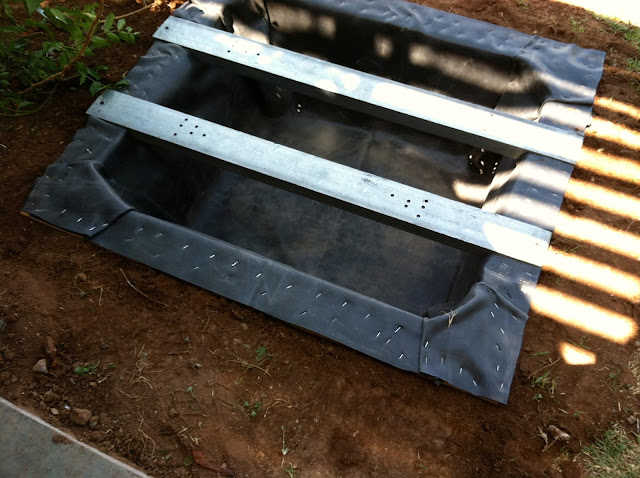 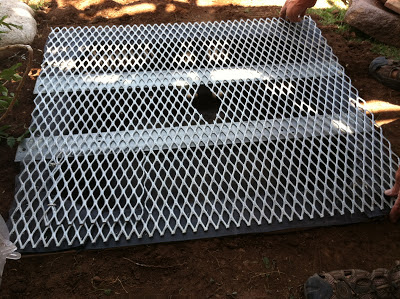 He then attached a metal grate using small sheet rock screws around the perimeter of the basin. There is a "trap door" built into the grid, which is placed closest to the power source. Then he placed the pump in the catch basin through the trap door with the intake on its side (bottom down). He ran the pump electrical cord out the trap door of the grate in the direction of the power source. 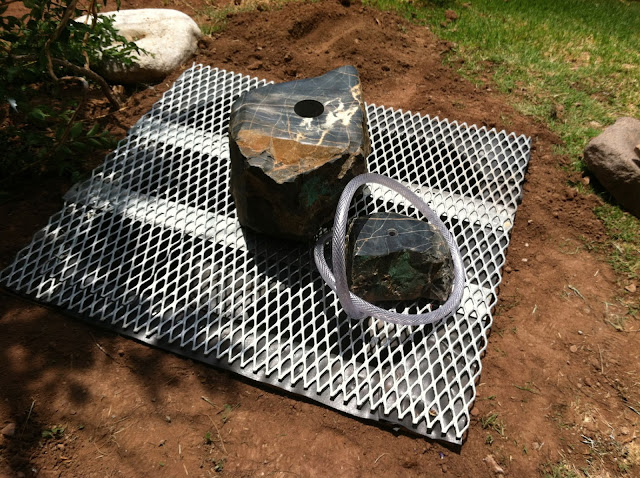 We're almost there! Here, he places the (very heavy..you're welcome dear) stone fountains on the grid over the steel channel. He threads the plumbing hose from the top of the fountain stone out the bottom and into the cutout in the center of the grating. At this point he adjusts the gasket on each of the hoses to create a snug fit in the fountain stones. You don't want the hose falling out into the catch basin...pain!! He built up the gaskets using duct tape so it was just the right thickness. The placement of the hose/gasket produces different levels of water movement and sound. Last step, connect the other end of the hose to the outflow nipple of the pump. Now fill her up and plug her in! 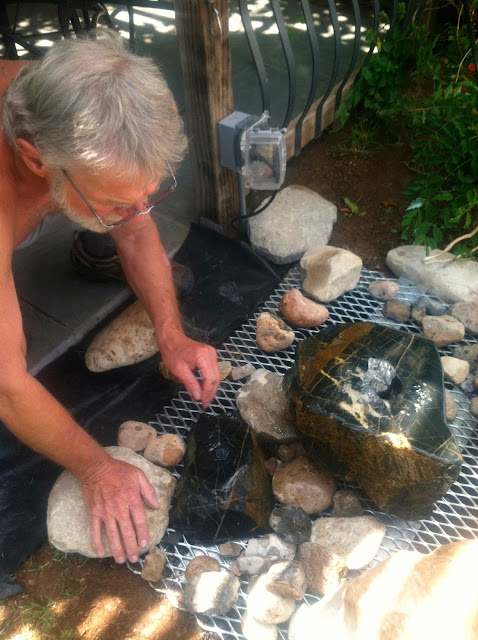 Now the FUN begins! Level the stones, place rocks on the grid, place plantings and we're UP!!

The lovely sound of water in the desert...just in time! Thank you sweet husband!

Wow!! Love this idea!! Will be trying it!